With Columbus Day coming up, what better way is there to spend your holiday weekend with Montgomery Bakehouse sweets? Whether you have off work or school, or not, some of our fall treats and other classic Bakehouse sweets will make the perfect weekend combination. Thanks to Columbus, we have this widely known “new world”. Although he was not the first to discover it, he becam

e the face of North America because of his brave trip here and because he made the attributes of North America so well known to the others living in Europe at the time. If it had not been for him, we may not be living in or have the same country that we live in today.  After everyone telling Columbus that there was no way that he could sail the other direction to reach the West Indies, it is so inspiring to see that Columbus never gave up on his dream, and in turn discovered what would become the greatest nation in the world. It is so amazing to  look back on our American heritage and truly see how God had such a big role in shaping our country in everything from Columbus happening to find North America to the founding fathers creating a government unlike any other government around during that time, and what would become the longest governing document. To find out more about America’s godly heritage, visit http://www.wallbuilders.com. This is a great organization that we as a family support, and we encourage others to research them and their mission. To celebrate all of America’s heritage, try our delicious George Washington Cake. This is a molasses cake with a pie crust bottom, and chocolate icing on top. Although it may not be named after Columbus, without Columbus, America may not have seen such a great man as George Washington. Come in today and on Columbus Day to try this delicious treat! 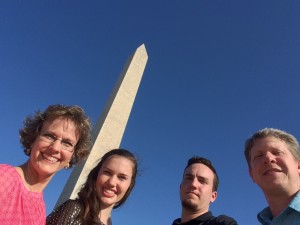 This is our family in front of the Washington Monument in Washington, DC.