One a penny, two a penny!

While these days hot cross buns will run you a bit more than they did in the song, they’re still as popular as ever during Lent and Easter. It’s a treat that makes its way to us from merry old England, where hot cross buns have been enjoyed for centuries. They even come with a fair bit of superstition and legend attached to them!

What Is a Hot Cross Bun?

These are fluffy yeast buns that are often made with raisins or currants and marked with a cross. While the original buns sported plain crosses made by slashing the dough with a knife, today we love them with sweet white icing piped over them to make the cross stand out. According to legend, the first buns were made on Good Friday by a 12th century monk, but the first historical references date to the 1500s.

You might think that Queen Elizabeth I was too busy fighting the Spanish Armada and attending Shakespeare’s plays to care much about the London bakers, but apparently she found room in her schedule to decree that hot cross buns were such a special treat that they could only legally be sold on Good Friday, Christmas and funeral days. People tried to get around this by making their own, though if they were caught, they had to give away their precious dessert to the poor. 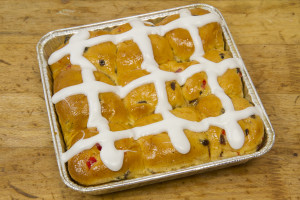 Because of their legally enforced scarcity, all kinds of beliefs popped up about the buns’ magical, sacred properties. People would hang them from the rafters to ward off evil spirits and believed they’d last for a year if baked on Good Friday. They’re also believed to strengthen friendship when split in half and shared.

Whether you plan to share your hot cross buns or not, you can get as many as you like at Montgomery Bakehouse this season! And don’t worry about breaking any laws — Queen Elizabeth has no say about how often we bake them here in Texas!